"Science Fiction: An Oral History" features in-depth dialogs with prominent authors of the genre's Golden Age (1930-1960) and New Wave (1960-1980) eras, including Philip K. Dick, Theodore Sturgeon, Fritz Leiber, Roger Zelazny, C.L. Moore, Leigh Brackett, Norman Spinrad and Robert Anton Wilson. Through these interviews with some of the most highly-regarded figures in the field, we get first-hand insight into the changes in style, subject and society that shaped the evolution of the genre over its first half-century. Topics covered include their influences and working habits, analysis of their major works, discussions of science fiction as the modern mythology and its differences from mainstream fiction, as well as numerous anecdotes from their professional and personal lives. Far from a dry history of a dynamic subject, the interview format captures the spontaneity, enthusiasm and humor of spending a couple hours in good conversation with an old friend. 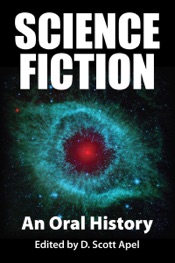