Do you believe in dragons? Werewolf cop Rick would say no . . . until a dying faerie tells him the fate of his city depends on him. If he can’t protect a mysterious woman in peril, everything may be lost. The only discovery more shocking is that the woman he’s meant to save is his high school crush!

Half-fae Cass earned her Snow White nickname. All her life, her refusal to abuse fae glamour kept men like Rick at arm’s length. Now something new is waking up inside her, a secret heritage her pureblood father hid from her. Letting it out might kill her, but continuing to conceal it isn't an option. The dragons’ ancient enemies are moving. If they find the prize before Rick and Cass, the supe-friendly city of Resurrection just might go up in flames.

“I have fallen in love with Emma Holly’s Hidden series and all its characters.”—Joyfully Reviewed 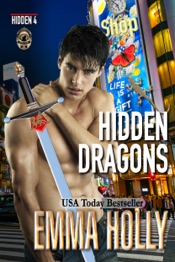