About the book
The Atharvaveda

The Atharvaveda is a sacred text of Hinduism and one of the four Vedas, often called the "fourth Veda". According to tradition, the Atharvaveda was mainly composed by two groups of rishis known as the Atharvanas and the Angirasa. In the Late Vedic Gopatha Brahmana, it is attributed to the Bhrigu and Angirasa. The Atharvaveda, while undoubtedly belonging to the core Vedic corpus, in some ways represents an independent parallel tradition to that of the Rig-Veda and Yajurveda. It incorporates much of the early traditions of healing and magic that are paralleled in other Indo-European literatures.

About the Translator
Ralph Griffith

Ralph Thomas Hotchkin Griffith (1826-1906) was a scholar of Indology. he wa a B.A. of Queen's College and was elected to the vacant Sanskrit Scholarship on Nov 24, 1849. He translated the Vedic scriptures into English. He also produced translations of other Sanskrit literature, including a verse version of the Ramayana and the Kumara Sambhava of Kalidasa. He held the position of principal at the Benares College in India. His translation of the Rigveda follows the text of Max Müller's six-volume Sanskrit edition. His readings generally follow the work of the great scholar Sayana who was Prime Minister at the court of the King of Vijaynagar - in what is now the District of Bellary in the Indian state of Karnataka - in the fourteenth century. 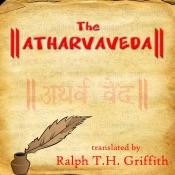