A collector's item for anyone who appreciates the skill and mastery of the bartending profession, Mixellany's Commemorative Edition of Harry Johnson's Bartenders' Manual is a lasting tribute to one of the profession's greatest champions.

This very special edition also contains a tour of Johnson's New York. Written by Anistatia Miller and Jared Brown, who conducted the tour in May 2010 for a select group of mixologists, the tour highlights the places Harry worked, the bars he owned, the building that he and his wife called home, and his final resting place.

Also exclusive to this commemorative edition is an excerpt from Miller & Brown's award-winning book Spirituous Journey: A HIstory of Drink, Book Two narrates Johnson's life through his death with some eye-opening discoveries!

Originally published in 1882, Johnson revised and expanded the book another two times as his own knowledge of the business evolved. (A final edition was published in 1934, a year after his death as Prohibition came to a close.)

Containing the first published recipes for the Martini and the Marguerite, Johnson was also the first to document dozens of cocktails that included vermouth—a new import that landed on American shores at the height of his career. 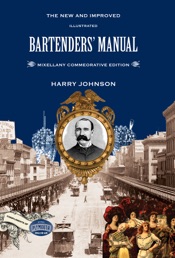