Isn’t it amazing that our most commonly-used word, ‘I’,
has been used so adeptly as a pointer to the Ultimate Truth
by the greatest Advaita teachers?

The three teachers discussed in this book – RamanaMaharshi, Atmananda and NisargadattaMaharaj – steer clear from all religious dogma, therefore making their teachings especially suitable for both westerners and easterners. These three may be considered as ‘the Big Three’ of the twentieth-century Advaita Vedanta. They are the ones who distilled Advaita to the heart of the matter: direct recognition of your true nature. All three of them used the word ‘I’ as an integral term to point to the Ultimate Principle: the first two spoke in terms of ‘I-I’ and ‘I-Principle’ respectively, and Nisargadatta offered his two-step approach of ‘I am’ and ‘I, the Absolute’. With this they showed that the way is a direct way in the first place, a way that cannot be found anywhere else than within you, with the direct experience of ‘I’. Probably no other teacher or writer, from East or West, has investigated the truth of what ‘I’ really is, as thoroughly as these three spiritual giants. 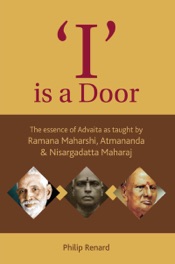